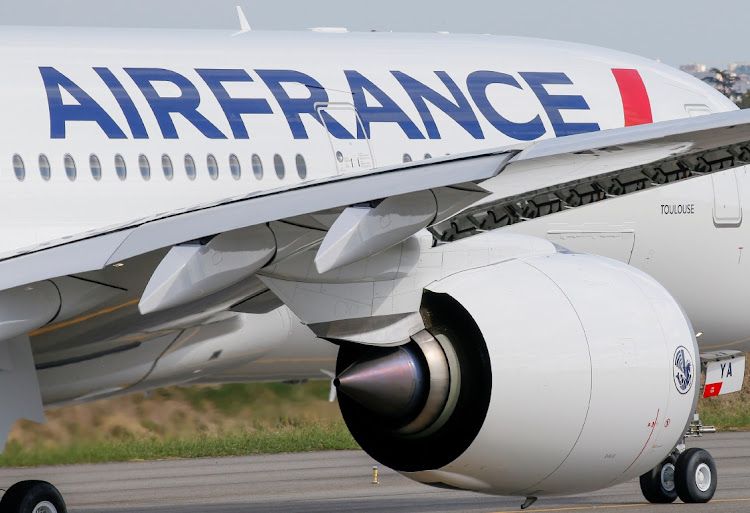 An Air France Airbus A350 prepares to take off in Colomiers near Toulouse, France. Picture: REUTERS/REGIS DUVIGNAU

Paris — Air France-KLM will receive as much as €4bn in a French rescue plan that may not be enough to see the embattled carrier through the ongoing Covid-19 pandemic.

The package will see the French government re-emerge as the biggest investor with a stake that could be just shy of 30%. It comes after months of tough negotiations between shareholders France and the Netherlands, and the European Commission, which has given its blessing. The plan is aimed at giving the carrier some breathing room as it confronts one of the worst crises to hit the airline industry.

With talks still ongoing for possible additional financial aid from the Dutch state as well as as-yet-unspecified measures for the whole group in the coming year, “this is not the end of actions to strengthen the balance sheet”, Bernstein analyst Daniel Roeska said in a note.

The long-awaited package from France comes amid a surge in Covid-19 across the region that has forced fresh lockdown measures in the country, and led the UK to waver on a May 17 target to reopen for foreign travel. The pandemic has been particularly brutal on European airlines and has prompted other rescues, with the German government taking a 20% stake in Deutsche Lufthansa and Italy fully nationalising bankrupt Alitalia.

For Air France-KLM, “this is the first step” in repairing the unprecedented financial damage wrought by the pandemic, CFO Frederic Gagey said on a call on Tuesday with journalists. The support destined for Air France “should be followed by other equity measures” to allow Air France-KLM to return to a normal level of leverage, he said.

The shares were nearly unchanged in Paris.

The French plan is aimed at easing the carrier’s heavy debt load, which ballooned in 2020 when the two shareholder governments granted a total of €10.4bn in direct loans and state-backed guarantees in response to the initial virus wave, when air traffic came to a virtual standstill.

France will convert its €3bn direct loan into hybrid instruments. The airline will also proceed with a capital increase of up to €1bn. The operation will bring in cash and lead to a re-jigging of the airline’s shareholding.

The French state will participate in the recapitalisation “while keeping its stake strictly below 30% of the share capital and voting rights”, the airline said in a statement. Shareholder China Eastern Airlines will also take part but keep its holding below 10%. Delta Airlines, which has 8.8%, and the Dutch state, which has about 14%, won’t subscribe.

France doesn’t intend to hold more than 29.9% of the share capital of Air France-KLM or take control of the carrier, French and Dutch ministers said in a joint statement. A Dutch package is still being studied and negotiated, they said.

“The acute need at KLM is less urgent,” Dutch finance minister Wopke Hoekstra wrote on Twitter, telling parliament in a letter than the Netherlands’s holding could fall to about 9.3% after the capital increase.

France and the Netherlands have often been at odds since the 2004 merger of Air France and KLM, with the Dutch arm long resenting French control, Air France’s weaker profitability and history of labor conflict.

The Netherlands’ stealth acquisition of a stake in the carrier just over two years ago triggered an unprecedented spat. While the move blindsided Paris and laid bare the Dutch intention to exert more influence on Air France-KLM, it remains unclear how this will work when France raises its stake.

In granting permission for the aid package, the EU obtained conditions to offset antitrust concerns. CEO Ben Smith called the talks with the commission “long and arduous”, but said the 18 daily slots the airline would have to relinquish at Orly airport, outside Paris, to competition won’t hurt its plans to expand its low-cost Transavia arm.

The airline has more than 300 slots at Orly and 1,000 overall serving the French capital when those at Paris-Charles de Gaulle are included. Any carrier acquiring slots from Air France must base its aircraft and crews at the airport “in compliance with national and EU labour laws”, according to the statement. France has long accused budget rivals of skirting employee rules to cut costs.

The airline warned on Tuesday that the third wave of the pandemic and ongoing travel restrictions have hurt first-quarter earnings. It expects operating loss of about€1.3bn.

The low-cost carrier plans to operate 582 routes in, out of, and across Spain, including 48 new ones and predicts Britons will holiday abroad
Companies
3 weeks ago

The carrier is now selling $6.5bn worth of bonds and $3.5bn worth of of loans, the largest-ever debt sale by an airline
Companies
1 month ago
Next Article