While the gains Diess has generated lately are still a far cry from what Elon Musk pulled off in 2020, they have partially made up for lowered compensation 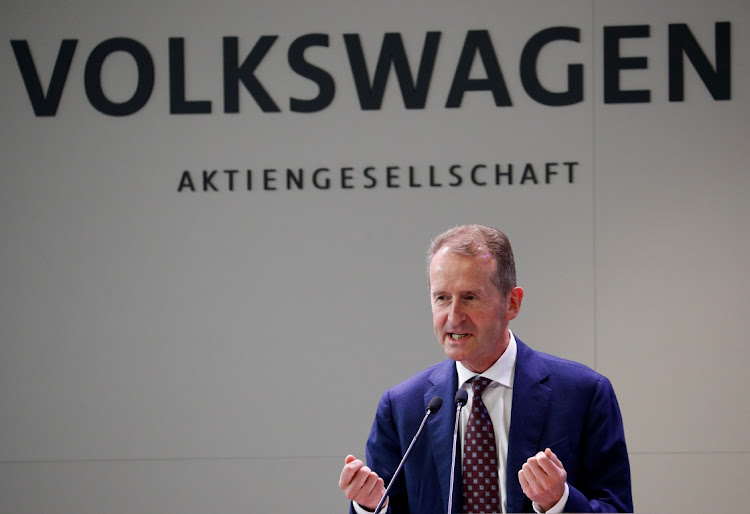 Frankfurt — Volkswagen has swiftly gone from corporate dinosaur status to stock market darling, and its CEO’s imitation of Elon Musk has a lot to do with it.

Herbert Diess has taken a page out of the Tesla CEO’s script for captivating investors big and small, taking a hands-on role in getting VW’s message out on social media and staging splashy events big on ambition. It’s paying off — the carmaker’s common shares closed on Tuesday at their highest since 2009.

The turnabout in sentiment on VW has been dramatic and sudden. Its market capitalisation dropped in 2020 as Tesla vaulted past all other vehicle-makers to become the world’s most valuable by a wide margin. But already in March, VW has added €31.6bn to its valuation, driven by optimism it may be able to catch up and perhaps even surpass Tesla in global electric-vehicle sales.

The amount of market value added in March is well over half the total capitalisation of Diess’s former employer, BMW, which set a goal on Wednesday for roughly half of total sales to be all-electric by the end of the decade.

VW’s stock started its ascent when UBS analysts issued a bullish set of reports on its findings from tearing apart VW’s first mass-market model built off a dedicated EV platform, the ID. 3 hatchback. The car is “the most credible EV effort by any legacy auto company so far,” wrote Patrick Hummel, who raised his price target on the shares.

Much like Musk tries to dominate the news cycle, VW has made rapid-fire announcements in the weeks since then. It took the wraps off a more spacious version of the Porsche Taycan, doubled the VW brand’s EV sales share target for Europe and announced through Diess’s LinkedIn and Twitter accounts that it would host an event similar to Tesla’s “Battery Day” in September.

“VW’s Power Day was a watershed event in the company’s history,” Tom Narayan, an analyst at RBC Capital Markets, wrote in a report Wednesday, raising his price target by roughly a third. He said VW’s battery-electric vehicles “should enable shares to re-rate higher given improved profitability.”

VW followed up its declaration that it aims to build six battery factories in Europe alone by the end of the decade with an annual earnings conference that it also chose to focus on EVs. The common shares soared as much as 29% intraday in Frankfurt, the biggest jump since Porsche’s failed attempt to acquire the company a dozen years ago triggered a short squeeze.

VW’s common stock is much less liquid than VW’s preference shares because three holders — the Porsche and Piech family, the German state of Lower Saxony, and Qatar — hold 90% of it. The preference shares finished Tuesday up 6.7% to close at the highest since July 2015.

The outsize gains by VW’s common stock have been partly driven by US retail-investor buying and high short interest, according to Ken Menager, a special situations strategist at Avalon Capital. VW’s American Depositary Receipts are based on the common-share listing in Germany, and volume has soared the past few days.

In addition to VW’s key shareholders, one big beneficiary of the share surge is Diess. A little over a year ago, the 62-year-old CEO initiated a stock-buying plan with a standing order for €50,000 worth of shares a month. The common stock hovered about €100 in March 2020, when the Covid-19 pandemic started to roil the global car industry. It’s now at €266.60.

While the healthy gains Diess has generated lately are still a far cry from what Musk pulled off in 2020, they have partially made up for lowered compensation. The CEO’s salary, including pension contributions, fell to €7.7m in 2020, from €8.4m in 2019, VW disclosed on Tuesday in its annual report.

The wealth of the chair of Berkshire Hathaway this week jumped to $100.4bn, according to the latest Bloomberg billionaires index
Business
1 month ago
Next Article