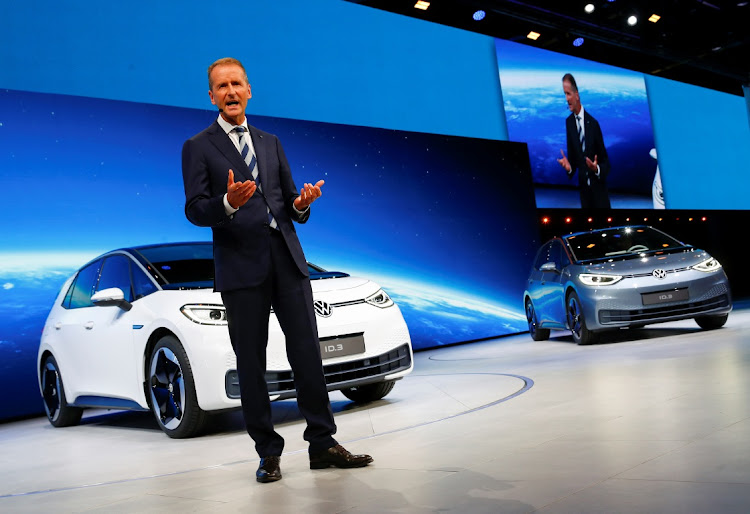 London — “Let me begin with the obvious: e-mobility has won the race,” Herbert Diess, CEO of Volkswagen, said on Monday. “It is the only solution to reduce mobility emissions fast.”

Diess was speaking at an event VW dubbed “Power Day,” at which the company laid out its big plans for beating Tesla and becoming the world’s largest maker of electric vehicles. Instead of talking about cars, design, or other customer-facing features, however, most of the splashy event was spent on a boring-looking thing that goes inside EVs: the lithium-ion battery.

That is because batteries make up more than 30% of an electric car’s cost. And with every carmaker looking to pivot to EVs, it’s not just about getting batteries at the cheapest price possible but securing enough supply to meet those ambitions.

The pivot will not be cheap. VW announced it plans to build six battery factories across Europe by 2030, which BloombergNEF estimates would cost about $29bn. It is also making investments in unifying the design of its battery and in recycling precious metals. Investors liked the plan, pushing VW’s common shares up 3.6% on Monday. They surged another 29% on Tuesday morning.

Yet the world’s largest carmaker is going to find it hard to beat Elon Musk. “Tesla is likely to maintain its broad EV leadership,” Ben Kallo, an analyst at Robert W Baird, wrote in a report. He walked away from VW’s hours-long presentation still viewing the Model 3 maker as having the upper hand with regard to batteries.

Venkat Viswanathan, an associate professor at Carnegie Mellon University and an electric-vehicle expert, also thinks Tesla’s drivetrains comprising both batteries and electric motors are four or five years ahead of the competition. They offer “the highest driving range for the same battery capacity,” he said.

Kallo gives VW’s ambitions high marks — he’s just not convinced Musk will cede pole position. “We view Volkswagen as a potential leader in the ‘non-Tesla’ portion of the EV market,” Kallo wrote. “A non-Tesla EV ecosystem will emerge, similar to the non-Apple ecosystem in smartphones [Android].”

Apple built an ecosystem that integrates hardware innovations such as processing chips and camera sensors with software lock-ins such as the iOS operating system and the App Store. It may have annoyed many users, but Apple has stuck with its proprietary lightning charging cable.

Tesla has done something similar with EVs by developing its own battery chemistry, electric motors and driver-assistance system. It has also built a supercharging network other cars cannot use (at least not yet).

Google’s Android operating system and Samsung Electronics managed to carve out a share of the global smartphone market, but Apple became the world’s most valuable company by building a dominant brand and ecosystem for which consumers are willing to pay much more.

The conclusion Kallo reached on Monday is similar to one UBS analyst Patrick Hummel came to after his team completed a teardown of VW’s ID.3. “VW might not be the Apple, but the Samsung of the EV world,” he said earlier this month.

Just like Samsung has an edge over Apple with its superior smartphone display, there is one area where VW may be ahead of Tesla. The German carmaker has placed a big bet on next-generation lithium-ion batteries.

In 2012, VW invested in Silicon Valley start-up QuantumScape, which was building solid-state batteries that promised to increase driving range by as much as 50% and reduce charging times to 15 minutes. Though QuantumScape’s battery will not be in a car before 2025, the company’s market value stands at about $23bn, about a sixth of VW’s valuation.

While Tesla has many battery innovations under its belt, from novel chemistry to more efficient production methods, it has not said anything about developing solid-state batteries.

Switch on to EVs now - or lose out

The Gambit Energy Storage unit is working on a system that could power about 20,000 homes
Companies
1 month ago