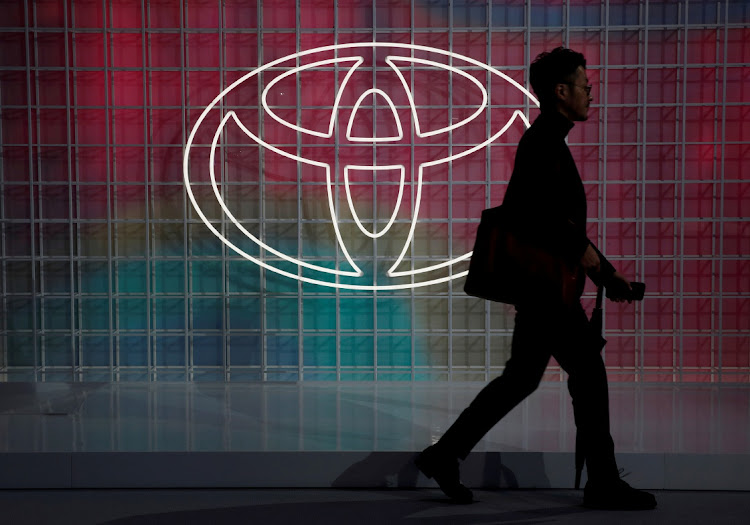 A man walks past a Toyota logo at the Tokyo Motor Show, in Tokyo, Japan, October 24, 2019. Picture: REUTERS/EDGAR SU

Tokyo — Toyota Motor, the world’s top-selling carmaker in 2020, on Wednesday raised its profit outlook for the fiscal year through March, another sign the Japanese company is powering ahead as it recovers from the pandemic.

Toyota forecast an operating profit of ¥2-trillion ($19bn), up from ¥1.3-trillion  set in November. Analysts were on average projecting ¥1.5-trillion. For the October-December quarter, Toyota reported a profit of ¥988bn, compared with predictions for ¥571bn.

The upgraded forecast highlights Toyota’s growing confidence that it can steadily attract buyers and produce vehicles, even as the industry struggles with a weaker global economy and chip crunch that’s hampering production. It also means the carmaker will be able to comfortably achieve President Akio Toyoda’s vow to remain profitable during the pandemic.

If dividing the motor industry into winners and losers, “clearly Toyota is winning”, Bloomberg Intelligence analyst Tatsuo Yoshida said. An ability to keep pushing out new vehicles like the popular crossover SUV RAV4 in major markets has been key, he said. “Toyota habitually pursues R&D and product development, therefore flowers are blooming for it even in times like these.”

Toyota’s shares jumped as much as 3.2% in Tokyo on Wednesday to trade at the highest since 2015.

While widespread factory and showroom shutdowns in the spring dragged Toyota’s global sales down 21% in the first half of 2020, sales flipped into the black in September and were up 10% year-on-year by December. Revenue for the latest quarter rose 8% to ¥8.2-trillion, compared with analysts’ average prediction for ¥7.6-trillion.

For the full year, Toyota forecast ¥26.5-trillion  in sales, broadly in line with the ¥26.3-trillion analysts were projecting.

Toyota’s forecast for a better-than-expected profit bodes well considering the uncertainty that still grips the global auto industry as it weathers the chip crunch. The shortage, which arose as the industry struggled to meet rising demand for chips for everything from cars to electronic devices, is dimming many other carmakers’ hopes for a V-shaped Covid recovery.

Japanese carmakers are projected to lose 500,000 units of output due to the shortage, largely in the first half of this year, according to analysts at Mitsubishi UFJ Morgan Stanley Securities. Toyota, for one, said it would trim about 40% of its output of Tundra model trucks made in Texas last month.

But Toyota is likely to face only minor disruptions compared to rivals like Honda Motor, because its semiconductor supply chain is largely based in Japan where shortages have been negligible. Toyota CFO Kenta Kon said on Wednesday that he saw no impact from the chip shortage in the short term.

In a recent outlook on Japanese auto industry results, Jefferies analysts Takaki Nakanishi and Lilin Zheng said that Toyota’s retail volumes for the quarter “sharply beat expectations” due to vibrant sales in almost all regions.

Each month since August, Toyota has churned out a record number of vehicles. In 2021, it plans to produce an unprecedented 9.2-million cars globally, up 2% from its 2019 pre-pandemic output, Nikkei reported last week without attribution.