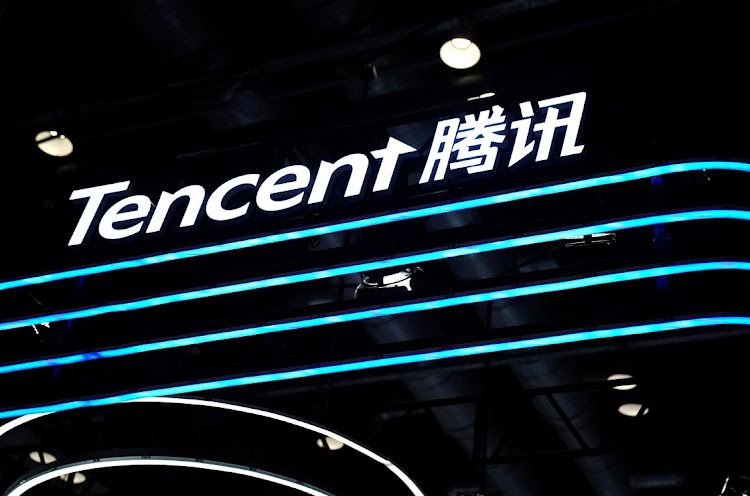 A Tencent sign at the 2020 China International Fair for Trade in Services in Beijing, China, September 4 2020. Picture: REUTERS/TINGSHU WANG

They are paying up for bullish derivatives tracking the Chinese internet firm, buying thousands of January call options that expire on Thursday. The price of one Tencent contract, which bets the stock will rise past HK$800 by expiry, surged as much as 61,100% on Monday. Traders also rushed to offload their bearish puts, with one of Monday’s most-traded contracts down as much as 84% in value.

Naspers has a 31.2% stake in Tencent through its international internet arm Prosus.

Tencent has become a prime target for mainland traders flooding record amounts of cash into Hong Kong-listed shares this year, with net purchase of the stock accounting for about a quarter of total money coming in, according to exchange data.

The buying frenzy has also boosted Tencent’s market value by nearly $225bn this year, the most worldwide, according to data compiled by Bloomberg. Tesla is the second-largest gainer, up $134bn.

Tencent shares now trade at almost 39 times analysts’ estimated earnings for the next 12 months. While that’s well above the average of 30 since Bloomberg began tracking the data in 2005, it’s still below the recent peak multiple of 42 reached in 2014 and 2018. It reached 65 at the height of China’s equity bubble in 2007.

On Monday, analysts at Citigroup lifted its target price on the firm by 19% to HK$876, the highest among analysts tracked by Bloomberg, citing the technology giant’s market share expansion and growth in the gaming sector and other digital businesses.

Beyond market share expansion and money flowing in, Tencent is also getting an additional boost from taking part in the city’s fast-growing initial public offering market. Kuaishou Technology, backed by Tencent, is seeking to raise as much as $5.4bn in Hong Kong in what would be the biggest internet IPO since Uber Technologies.

With the recent run-up, Tencent is now trading at its highest level on record. It’s largely avoided the tightening regulatory oversight that sparked a sell-off in rival Alibaba Group Holding and forced its part-owned Ant Group to jettison a record IPO.