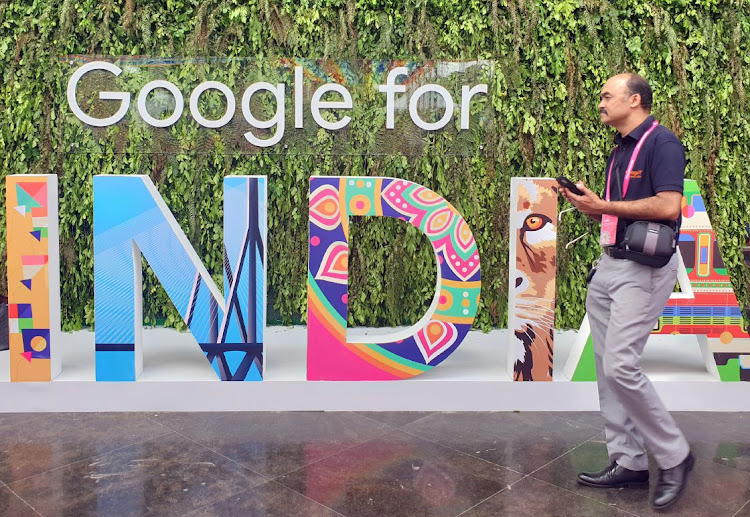 A man walks past the sign of ‘Google for India’, the company’s annual technology event in New Delhi, India, in September 2019. Picture: SANKALP PHARTIYAL/REUTERS

Glance, which feeds news and sports scores to phone-lock screens, is said to have reached a valuation of more than $1bn after completing a funding round led by Google. And VerSe Innovation, the studio behind the popular Dailyhunt news site and TikTok-like Josh app, said it passed that threshold after winning more than $100m from Alphabet’s search giant and Microsoft.

Google and its US internet peers are steadily amping up their investment in India, latching onto the only other country with a billion-plus population after getting shut out of China. From Amazon.com to Facebook, they are hoping to get in on the ground floor of what they envision as a smartphone and online commerce boom that could eventually create a market to rival the world’s number two economy.

The online search leader has struck an alliance with Mukesh Ambani’s Reliance Industries to invest $4.5bn and co-operate on technology initiatives including the development of affordable mobile phones. But they are also teaming with smaller outfits to target more local audiences.

“In the last two years alone, 100-million new internet users have come online from rural India,” Google vice-president Caesar Sengupta wrote in a blog post on Tuesday, announcing its investment in VerSe. “But many of these internet users continue to have trouble finding content to read or services they can use confidently, in their own language.”

Of the two, Bangalore-headquartered Glance Digital Experience is the more nascent outfit. It is the second unicorn to emerge from the group that created InMobi, a cloud marketing platform that became India’s earliest tech start-up to reach the milestone. That group was founded by 43-year-old Naveen Tewari, alumnus of the prestigious Indian Institute of Technology and holder of an MBA from Harvard Business School. On Tuesday, his 18-month-old firm announced it had scored $145m of investment from Google and billionaire Peter Thiel’s Mithril Capital.

Glance now has 115-million daily active users who average 25 minutes on the app each day. It operates only in the Android ecosystem and has partnered with leading device makers including Samsung Electronics, Xiaomi, Oppo and Vivo.

By partnering with Google, the company plans to take its product to the rest of Asia and launch in the US — where it will team up with carriers — and South America in 2021, Tewari said. Glance is now focused on acquiring users and has just begun experimenting with advertising-based monetisation models, according to Tewari.

Google also joined Microsoft and Alphawave in a financing round for VerSe, whose Dailyhunt is already a landing spot for more than 300-million users in a choice of 14 local languages. Sofina Group and Lupa Systems also took part.

Goldman Sachs and Sequoia Capital India are among VerSe’s other investors. VerSe says it plans to scale up Josh, broaden its content creator ecosystem and develop artificial intelligence and machine-learning technology to help it capture an ever wider audience. It will also explore potential moves beyond its home borders in other international markets that exhibit a need for vernacular content.

Josh is tailored to its home nation and available in a variety of local languages, touting it is “Made in India” at a time when its rival TikTok and dozens of other China-made apps have been banned over privacy and national security concerns. The app has quickly accrued an audience of 77-million monthly active users and now accounts for over 1.5-billion video plays per day, according to a company statement.