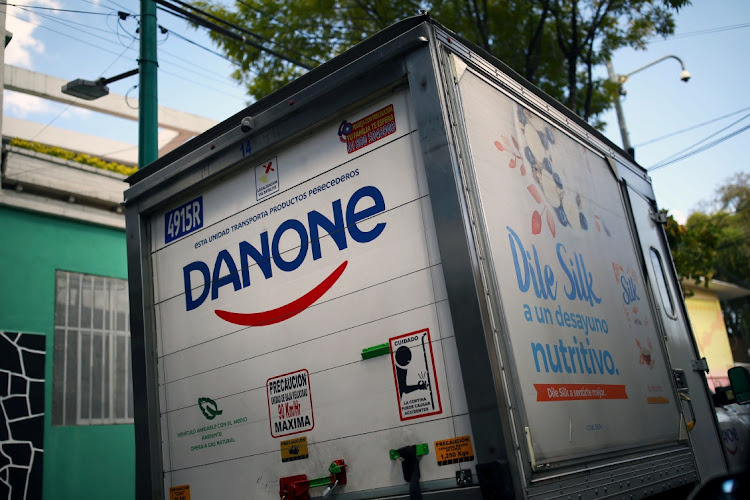 A company logo of the French food group Danone on a truck in Mexico City, Mexico. Picture: REUTERS/EDGARD GARRIDO

Danone will cut as many as 2,000 jobs, including one in four positions at its global headquarters, as the world’s largest yoghurt maker attempts to revive profitability after getting hit by the coronavirus pandemic harder than other rivals.

The company said on Monday it is considering moving global headquarters for its various businesses closer to the base of its French operations in Paris. Annual cost savings should reach €1bn by 2023 after the measures, also fuelled by more efficient purchasing. The job cuts represent about 2% of Danone’s total staff.

CEO  Emmanuel Faber, who started the year with a focus on sustainability, is changing tack to address internal management shortcomings. The company has struggled for years to breathe life into its European dairy division despite introducing dozens of new products. Now with the pandemic, its bottled water division is reeling as restaurants shut down.

“We had structural weaknesses in the way we worked and organised,” Faber said in a call with analysts. “We were over-innovating, and pushing products we weren’t able to support or that wouldn’t make it as a lasting innovation. It was a misuse of resources.”

“We can’t help feeling that we’ve been here before with Danone — frequently,” wrote James Edwardes Jones, an analyst at RBC. “We would like to say that this will be the one that delivers, but experience suggest caution is appropriate.”

Danone is abandoning multiple layers in its hierarchy, which had been based on global product categories, to give more authority to local management. Competitors such as Nestlé have long followed a regional strategy. Investors want more portfolio changes and sweeping personnel changes amid discontent with Faber, a survey showed in October.

The company expects one-off costs related to the changes of about €1.4bn between 2021 and 2023. Danone has global headquarters across in the world in locations such as Singapore and Amsterdam, where it has focused on medical and infant nutrition. About 400 to 500 jobs will be cut in France, a spokesperson said.

Investors may need to get ready for a long period of organisational turmoil, according to Bruno Monteyne, an analyst at Sanford C Bernstein.

“These are major shifts that will absorb lots of corporate energy for at least 12 to 18 months,” Monteyne wrote in a note. “It also implies the centre failed to run the brands effectively. What really did go wrong? And why will the new organisation deal with that better?”

Danone also said its adjusted operating margin should exceed 15% in 2022 and reach mid-to-high teen levels later, which would be a record. The company expects 14% this year, which is lower than a target it had set in 2017.

Juergen Esser, who became CFO in October, said the planned €2bn sustainability investment over the next three years remains broadly unchanged, though in the short term it needs to adjust to disruptions in the recycled plastic market due to the pandemic.

As more people dine at home due to the pandemic, restaurant chain’s offer lets people prepare its food in their own kitchens
Companies
6 months ago

Tiger Brands has not given up on long-term growth

Covid-19 has had a severe effect on the food producer, hitting its most profitable products the most
Companies
6 months ago

Consultations on job cuts are ongoing, the food group says, as profit after tax increased by just 0.3% in its year to September 27
Companies
7 months ago
Next Article