Warren Buffett’s firm acquired about 5% in Itochu, Marubeni, Mitsubishi, Mitsui & Co and Sumitomo over the past twelve months 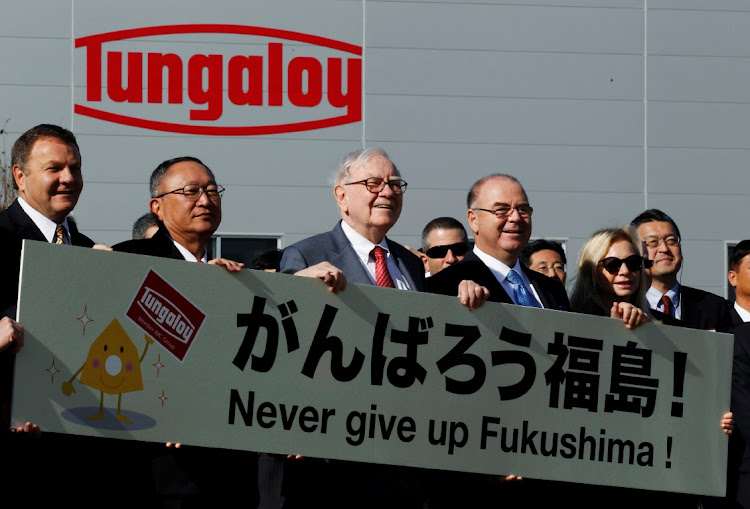 On his first visit to Japan in November 2011, Berkshire Hathaway Chairman Warren Buffett (C) posed for a photo session during the opening ceremony of a new plant in Iwaki, Fukushima Prefecture, built by Tungaloy Corp in which Berkshire Hathaway is invested. November 21, 2011. Picture: REUTERS/KIM KYUNG-HOON

New York/Singapore — Warren Buffett’s Berkshire Hathaway bought stakes in five of Japan’s biggest trading companies, adding to the billionaire investor’s wager on the commodities sector and marking one of his largest-yet forays into Asia’s second-largest economy.

Berkshire acquired the stakes of about 5% in Itochu, Marubeni, Mitsubishi, Mitsui & Co and Sumitomo over the past twelve months, the US conglomerate said. The investments were valued at more than $6bn combined after shares of all five companies jumped at least 5% in Tokyo trading on Monday.

While Buffett has stayed relatively cautious with his record cash hoard since Covid-19 rippled through the global economy, Berkshire has been adding to its commodities exposure with deals including a $4bn agreement to purchase most of Dominion Energy’s natural gas pipeline and storage assets in July.

Valuations in the sector have trailed the broader stock market in recent years, dragged down by falling commodities prices and an investor rotation towards technology stocks that has accelerated during the pandemic. Most of the Japanese companies targeted by Berkshire are major players in the nation’s energy and raw-materials industries, trade at less than book value and offer higher dividend yields than the benchmark Topix index.

“These trading companies generate strong cash flow, they pay out a lot of dividends and they have businesses that can’t be easily replicated,” said Thanh Ha Pham, an analyst at Jefferies Japan.

Buffett’s wager could help bolster sentiment towards both commodity plays and Japan. The $5-trillion economy is not only grappling with a persistent coronavirus outbreak and the postponement of the Tokyo Olympics, it’s also going through a leadership transition after Prime Minister Shinzo Abe announced his resignation for health reasons last week. Japan’s benchmark Topix index climbed as much as 1.9% on Monday, pacing regional gains and snapping three days of losses. Foreign investors have sold a net $43bn of Japanese shares this year, on course for the biggest annual withdrawals since 2018.

“I am delighted to have Berkshire Hathaway participate in the future of Japan and the five companies we have chosen for investment,” Buffett said in the statement. “The five major trading companies have many joint ventures throughout the world and are likely to have more of these partnerships. I hope that in the future there may be opportunities of mutual benefit.”

While Buffett visited Japan after its 2011 tsunami and nuclear disaster, he has stayed mostly quiet on investments in the country until now.

Japan’s general trading houses, known as “sogo shosha” with roots dating back hundreds of years, supply the resource-poor nation with everything from natural gas to noodles, and have spent the last few decades transforming into conglomerates that hold equity stakes in hundreds of diverse companies worldwide. While they operate in areas such as textiles and machinery, they still derive much of their revenue from energy, metals and other commodities.

Aside from their valuations, dividends and central role in Japan’s supply chain, the companies may have appealed to Buffett partly because the country has a reputation for trusted accounting, Pham said. Buffett also has much cash to invest, with a dearth of opportunities in his home market after share prices surged to record highs, Pham added.

Berkshire said it plans to hold the Japan investments for the long term and has pledged to only own as much as 9.9% of the shares in any of the five companies, unless given specific approval by the investee firm’s board of directors.

Mitsui said it isn’t aware of the reasons behind Berkshire’s investment. Sumitomo said it will engage in dialogue with Berkshire, while Marubeni declined to comment. Itochu and Mitsubishi couldn’t immediately comment.

Buffett’s investments mark a notable push abroad by his firm, which has long had its biggest holdings in US companies including Apple and Coca-Cola. Buffett said in 2018 that there was a good number of countries he’d be willing to invest in, though foreign firms didn’t turn to Berkshire for funding as quickly as US companies might. Berkshire’s offshore holdings include China’s BYD through its energy business and Brazilian payment company StoneCo.

Berkshire has piled deeply into various industries before, taking stakes in four major US airlines in 2016, though it ended up selling those stocks in 2020 as the pandemic brought most air travel to a halt. The company is also a major investor in US banks.

Buffett, who celebrated his 90th birthday on August 30, has built Berkshire into a conglomerate valued at more than $521bn, with operations ranging from insurers to industrial giants such as Precision Castparts and retailers such as Fruit of the Loom.

GLOBE & MAIL: No beach stall for Warren Buffett this time

‘Nothing can stop America when you get right down to it,’ says billionaire investor
World
1 year ago
Next Article

MICHEL PIREU: Follow the cash to get a true picture of a firm’s performance

MICHEL PIREU: Follow the cash to get a true picture of a firm’s performance