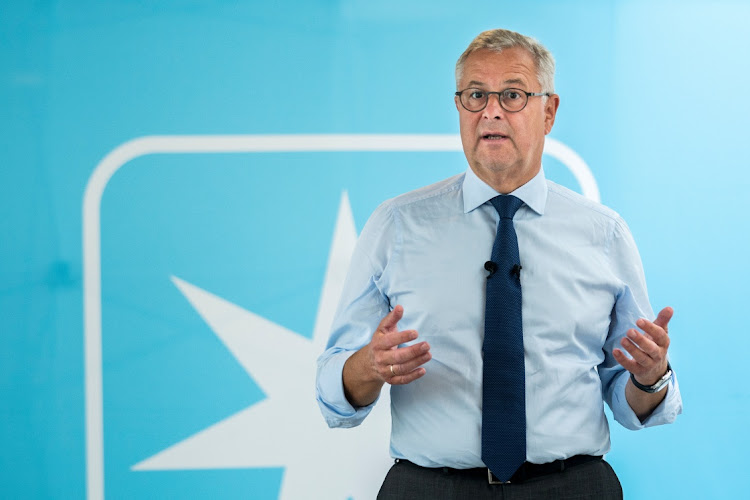 Copenhagen — The world’s largest container line may generate $1.5bn more in operating profit in 2020 than previously expected, as its business proves resilient to the Covid-19 crisis.

AP Moller-Maersk provided guidance for the first time since March, and painted a brighter picture of the future than investors and analysts had expected. Maersk CEO Soren Skou said he now expects container volumes to be back at 2019 levels by the beginning of 2021.

In an interview with Bloomberg TV’s Anna Edwards, Skou said Maersk is betting on a “U-shaped recovery”.

Shares in the company soared as much as 7.4% when trading started in Copenhagen on Wednesday. Maersk managed to cut operating costs by 16% in the second quarter which, together with a 4.5% rise in freight rates, more than offset a 16% drop in volumes.

“Going into the crisis, not knowing what would happen, we accelerated all of the cost-saving initiatives we had in the drawer, so it was across the board,” Skou said.

Ebitda in 2020 will be between $6bn and $7bn, Maersk said. Before suspending its guidance, Maersk had expected profit by that measure to reach about $5.5bn. Analysts surveyed by Bloomberg had predicted $5.83bn, on average.

In Wednesday’s report, Skou said that Maersk was “never closed for business” at any time during the Covid-19 crisis.

Maersk’s results suggest that the container shipping industry may be entering a positive cycle, Espen Landmark Fjermestad, an analyst at Fearnleys, said in a note.

“The liners are now enjoying a higher freight environment thanks to the significant consolidation the industry has seen over the last five years,” he said. “In addition, container volumes are now rebounding with potentially an inventory replenish story on top.”

Frode Morkedal, a managing director at Clarksons Platou in Oslo, said “freight rates are performing better than expected in 3Q despite liner companies adding back ship capacity to trade lanes, an indication of a stronger demand recovery than expected.”

“We continue to favour Maersk as a recovery bet and we remain constructive to the containership market outlook, and see earnings upgrades likely to further support the stock price,” Morkedal wrote in a client note.

But Skou also warned that the company’s current outlook doesn’t include the possibility of a “material” second phase of lockdowns. He also said that “significant uncertainties remain on demand growth due to Covid-19, global supply growth and bunker prices”.

“Global demand growth for containers is still expected to contract in 2020 due to Covid-19 and for Q3 2020 volumes are expected to progressively recover with a current expectation of a mid-single digit contraction,” Maersk said on Wednesday.

Maersk, which transports about 15% of the world’s seaborne freight, reported a second-quarter ebitda of $1.7bn, close to the highest analyst estimate. The company said on June 17 that the second quarter was developing better than first feared and that Ebitda was expected to be “slightly above” $1.5bn.

The group saw an uptick in activity in its port operations, but also faced various one-off Covid-19 costs
Companies
7 months ago

Maersk, which handles 20% of all containers shipped by sea, has idled almost 10% of its fleet, but is carrying some e-commerce cargo as planes are ...
Companies
11 months ago

Trencor will be left with its substantial net cash holdings of about R1.7bn
Companies
11 months ago

Textainer to buy back an additional R450m shares