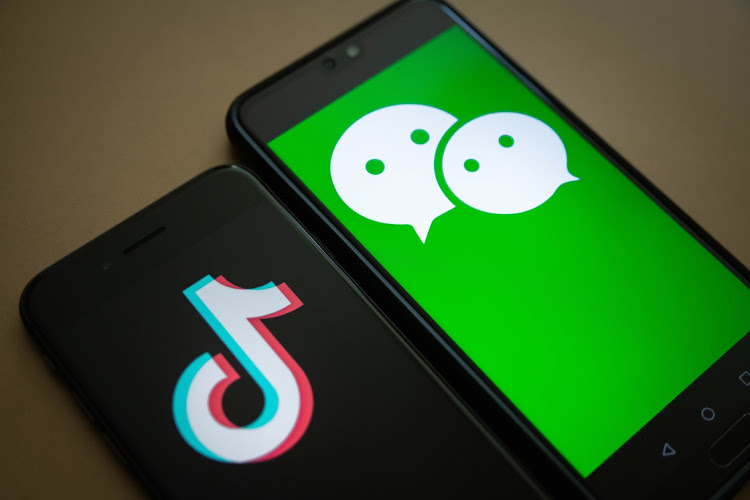 The logo for Tencent's WeChat app, right, and the logo for ByteDanc's TikTok app are arranged for a photograph on smartphones in Hong Kong, China. Picure: BLOOMBERG/ Ivan Abreu

Hong Kong — The Trump administration’s move to ban US residents from doing business with Tencent Holdings’ WeChat app rippled through Chinese markets, erasing $46bn from the internet giant’s market value and sending the yuan to its biggest slump in two weeks.

The US president’s executive order fuelled concern that the deteriorating US-China relationship will weigh on companies, economies and markets. Confusion over the scope of the order led to volatile trading on Friday, with Tencent plunging more than 10% before paring its loss to 6.8% at the midday break. A US official later clarified the ban will only cover WeChat.

China’s largest gaming and social media company cratered after the vaguely worded executive order raised concerns a ban could hammer not just the use of WeChat and WeChat Pay in the US but extend to business relationships with some of America’s largest corporations. The world’s biggest games publisher by revenue in 2019, according to Newzoo data, it collaborates with US industry leaders such as Activision Blizzard and Electronics Arts. It also holds a large stake in Fortnite maker Epic Games  and owns League of Legends developer Riot Games.

Before Friday’s drop Tencent was worth $686bn, making it the world’s eighth-largest company by market capitalisation and bigger than Berkshire Hathaway. Its huge size means it occupies a dominant position on global indices. The firm accounts for more than 6% of MSCI’s developing nation gauge and 4% of its Asian Pacific measure.

Trump’s order on WeChat came after a similar injunction against ByteDance’s TikTok, the viral video service the White House accuses of jeopardising national security. But Tencent is at the heart of communications between people and businesses within China and abroad, as the operator of WeChat.

“The US government is expected to follow up with more measures targeting Tencent,” said Steven Leung, executive director at UOB Kay Hian (Hong Kong). “Tencent’s overseas expansion map now looks a bit uncertain, since some M&A deals, especially if its targets are based in the US, will face challenges.”

Tencent’s largest shareholder is Naspers, which owns 31.2% of the WeChat owner.

Chinese tech giants are looking to delist from US bourses, with Tencent climbing as much as 4.7% on the news as it eyes Sogou’s AI technology
Companies
8 months ago

Alex Zhu, who has said he would turn down even Xi Jinping’s personal request for TikTok’s user data, will search for the company’s next big app
Companies
8 months ago

Donald Trump’s move has laid bare the different rules for different forms of media, and Facebook and Google want them ignored, writes David Fickling
Opinion
8 months ago
Next Article

TikTok and the splintering of global internet

US ban of TikTok weighs on Asian markets

TikTok and the splintering of global internet

US ban of TikTok weighs on Asian markets