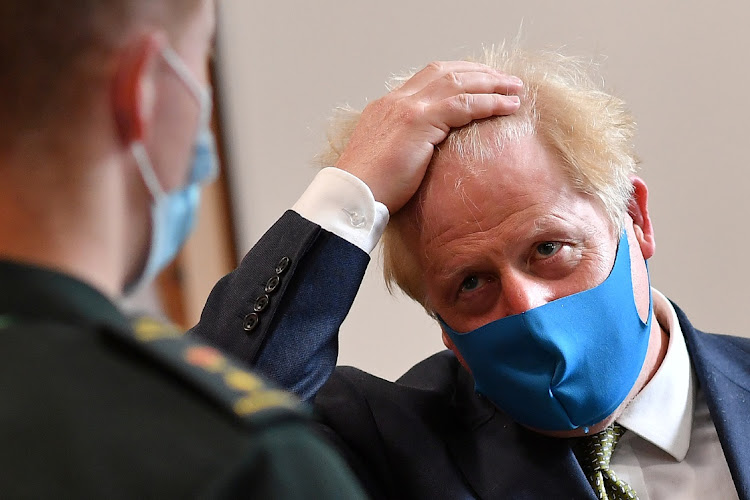 Britain's Prime Minister Boris Johnson talks with a paramedic as he visits headquarters of the London Ambulance Service NHS Trust, amid the spread of the coronavirus disease in London, Britain, on July 13, 2020. Picture: POOL VIA REUTERS/Ben Stansall

London — Boris Johnson is under pressure to announce a ban on telecoms companies from installing new equipment made by Huawei Technologies in Britain’s fifth-generation mobile networks from as soon as the end of 2021.

Britain’s National Security Council meets on Tuesday to decide on the company’s future in the UK in the wake of US sanctions against the company. According to people familiar with the matter, a review concluded that Huawei will now have to use untrusted microchips, making 5G security risks impossible for the UK government to control. Culture secretary Oliver Dowden could announce the decision straight afterward.

MPs in Johnson’s own Conservative Party have been determined to force the government to reverse its January decision to allow the company to supply 5G equipment. Confident that they have won that argument, they now want specific commitments on timing.

“The sanctions have changed the dynamic,” said Bob Seely, one of the leading Conservative rebels. “The government is listening, and it’s important to give them credit for trying to do the right thing.”

Seely said MPs wanted two things from the government: A “no new kit date”, after which no one would be able to install Huawei equipment, and a “rip out date”, by which time the company’s technology would have to be completely removed. He said he favoured a no new kit date in late 2021, and he said the debate among his colleagues for the rip-out date was between 2023 and 2025.

UK telecoms companies have warned of potential loss of service if they are forced to move too quickly. BT Group CEO Philip Jansen on Monday said that if the company is required to strip out Huawei 5G kit, “ideally we’d want seven years, and we could probably do it in five”. But he warned that if the ban extended to the entire network, it would be “impossible to do under 10 years”.

“We need to make sure that any change of direction doesn’t lead to more risk in the short term,” Jansen said, adding that BT will need to carry out 15 to 20 big software upgrades over the next five years. “If you don’t have these software upgrades, you’re running gaps in critical software that could have security implications far bigger than” under current plans to restrict Huawei to 35% of the network.

Any reversal in the UK position will allay the concern of the US, which opposed Johnson’s decision in January to allow Huawei’s continued involvement in building out its network. With US national security adviser Robert O’Brien travelling to France for three days, his UK counterpart, Mark Sedwill, will travel there to meet him for talks on China, the Times of London reported on Monday.

A crackdown on Huawei would further escalate tension between London and Beijing, already under strain over Hong Kong and the handling of the coronavirus pandemic. But the level of opposition in parliament leaves Johnson with little choice.

Conservative MPs fired a warning shot in a symbolic vote in early March. The escalating diplomatic row over Hong Kong is only likely to have increased their fears about allowing a company with close ties to the Chinese state to supply equipment for critical infrastructure.

“I’m calling for a fundamental foreign policy overhaul,” Tobias Ellwood, Tory chair of the House of Commons defence committee, told Talkradio on Monday. “China is now actually a full competitor to us and threatens us in certain aspects of life.”

From banning apps to punishing banks, China and the US are butting heads — but other countries are no fans of China right now either
World
9 months ago

The UK is not alone in criticising China’s new national security law, which came into force just  before the July 1 anniversary of Hong Kong’s return ...
World
9 months ago
Next Article