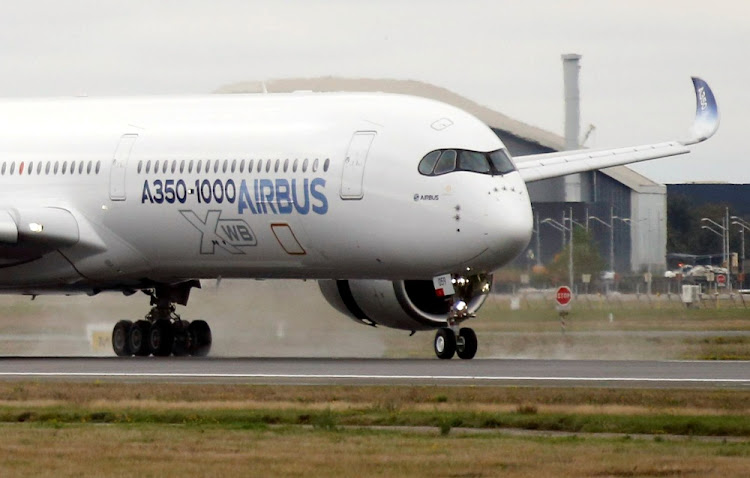 An Airbus A350-1000 lands during in Colomiers near Toulouse, southwestern France. Picture: REUTERS/REGIS DUVIGNAU

London — Over the past dozen years, Airbus has grown from a European aircraft maker with purely local production into a global manufacturer with assembly lines on three continents that give it more clout to win orders worldwide. But as the aviation industry enters its most dramatic downturn yet, the company is finding that broad reach turning from an asset into a burden.

Senior management came together on a conference call on June 5 to discuss their response to the crisis, people familiar with the discussion said. CEO Guillaume Faury had already warned that Airbus must act to cut staff because it’s bleeding cash. Highlighting the urgency, the aircraft maker garnered zero new orders and just 24 aircraft deliveries for the month of May.

Airbus already cut production targets, adapting to the new reality in the immediate aftermath of a global travel lockdown that started in mid-March. But with airlines warning that a recovery won’t be imminent, manufacturers face the tough question of whether deeper cuts are needed, and where the axe should fall first.

“They’ve got to decide what size of production system they want to meet that new level of demand,” said Sash Tusa, an analyst at Agency Partners in London. “The big issue there is going to be: can Airbus afford the luxury of having production in five different countries?”

When Airbus set up shop in China in 2008, the final assembly line in the city of Tianjin marked a shrewd strategic move because it widened the local appeal of its popular A320 model. The market now represents nearly a quarter of its commercial aircraft deliveries.

Creating a beachhead in Asia was “possibly the greatest decision Airbus has ever made in terms of market entrance”, Tusa said.

The manufacturer similarly turned its US facility in Mobile, Alabama, into an A320 line after American Airlines Group placed a major order. The smaller A220, acquired from Canada’s Bombardier, is now being made at the site as well.

Airbus said in April that it had no plans to exit either its A220 location in Canada or the Alabama assembly line, which officially opened this month. The US presence allows it to sell to American customers without the tariffs imposed on European aircraft in an ongoing trade spat.

But maintaining that global network is costly. Parts are shipped from locations across Europe, like wings from the UK or fuselage sections from France and Germany. It’s a finely tuned global mechanism that sets Airbus apart from rival Boeing, which has its assembly lines more locally grouped in the US.

Airbus has already taken action to cut costs, ending its E-Fan X project for hybrid electric aircraft with Rolls-Royce, pausing a plan to add another final assembly line at its Toulouse, France, headquarters campus and cutting back on capital spending. Yet the company may be forced to cut production more to reflect the drop in demand — meaning cash flow could ebb further, forcing a harsher approach to staffing levels.

The powerful Airbus labour unions will gather this week to discuss proposals by the management, people familiar with the matter have said.

An Airbus spokesperson said the company is studying additional measures to mitigate the impact of the crisis in co-operation with its social partners, but that no final decision has been made.

Airbus’s production remains firmly rooted in Western Europe. Wings come from the UK, the headquarters and its biggest assembly lines are in Toulouse, and the factory in Hamburg, Germany, cranks out most of the A320 aircraft. It also fits out interiors on many of the other, larger models. Components fly back and forth by cargo aircraft and are transported by barge and on trucks.

Initially set up decades ago as a consortium of European companies to compete with the US, Airbus still faces pressure to evenly distribute work between its home nations, not the least because Germany and France are its two biggest shareholders.

George Hamlin, an aerospace consultant with more than 40 years of experience in the industry, worked at Airbus back when it was still an economic partnership, from 1989 to 1996. In those days, the company’s structure determined everything from how much sales staff were paid to who got certain roles and where work was assigned, he said.

“When there was a new programme, for example with the A320, there was a very conscious effort to divide it up so the British would get 20% of the programme and the French and Germans would get their 30% each,” Hamlin said. “This was a little puzzling. Coming up in a US business environment, there simply wasn’t anything like that.”

While the company has changed considerably, there is still some pressure to spread the pain evenly across all of the European nations where it operates. The decision to pause plans for the A321 assembly line in Toulouse, just as the site loses work on wide-bodies, is likely to meet opposition from French unions who fear a shift towards Germany.

Airbus could be constrained in how many jobs it can cut in each nation. France and Germany have stepped in during the crisis to prop up their biggest airlines, and France is poised to unveil a rescue package this week for its aerospace industry.

Scaling back in any of these locations also looks challenging, as the company would be left with the same level of fixed costs but with fewer aircraft being produced. Airbus has always maintained it doesn’t add too much to its cost structure to have final assembly lines in different locations, but the economics may no longer stand up if it slashes production at a certain site.

“The downside of having locations over different continents is obviously the cash,” said Bank of America Merrill Lynch analyst Benjamin Heelan. “Airbus’s commercial business through the cycle hasn’t been as cash-generative as Boeing’s. It’s just a lot more onerous from a manufacturing and inventory perspective managing supply chains in three different continents.”

Boeing faces its own challenges, with the return to service of its 737 Max after two fatal crashes still unresolved. But the US company could end up in a stronger cash position in the short term, after the company announced plans to cut about 16,000 jobs.

Engine makers Rolls-Royce Holdings, Safran and General Electric’s aviation unit have also announced they plan to let go of a combined 24,000 workers, and airlines worldwide are under pressure to cut costs after the likes of Deutsche Lufthansa, among the biggest Airbus biggest customers, received state-sponsored bailouts.

Airbus may have no choice but to make some tough decisions. It burnt through €8bn in the first quarter, including a huge fine to settle a bribery investigation, and Faury has cautioned that furloughs and production cuts already announced could be just the start.

“Airbus at the trough will be less profitable than Boeing because it can cut less than Boeing,” said Tusa. Should the company decide to abandon some sites that it built up over the years, it would give “us a really important signal about how they feel about the industry going forward, and it won’t be a positive one”.

The planemaker wants to keep its jet output at 40% below pre-pandemic levels, focusing on less labour-intensive models
Companies
1 year ago

Amid the pandemic, the airline’s fleet of the double-decker behemoth will not easily find new buyers, nor can it be easily reconfigured for cargo
Companies
1 year ago
Next Article