High debt levels could down airlines already reeling from Covid-19 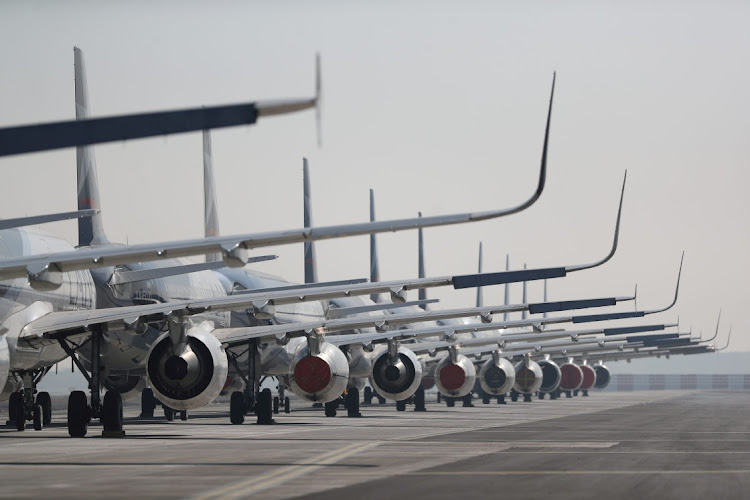 Passenger planes parked on a runway during a general quarantine amid the spread of the coronavirus at the Arturo Merino Benitez International Airport, in Santiago, Chile, on May 26 2020. Picture REUTERS/IVAN ALVARADO

The airline industry’s global debt is set to soar by almost 30% to $550bn (about R10,09-trillion) by year-end, which could place many airlines in danger of sinking under the burden of debt, global industry body the International Air Transport Association (Iata) warned in an analysis published this week.

The Covid-19 crisis has grounded many airlines across the world as governments put in place stringent travel restrictions to curb the spread of the coronavirus. In SA, the airline industry, which counts eight players, is on the verge of collapse with the airlines forced to cease operations since the lockdown came into force at the end of March. The airlines had enough cash in hand to survive for two months, so by June they could be unable to meet their financial obligations.

Before the onset of the crisis, airlines and tourism in SA employed about 500,000 people and contributed about R180bn to the economy. Iata has estimated that jobs could now shrink by almost 50% and the contribution to the GDP could drop to R97bn.

While the government indicated that limited business travel will be allowed when the country’s lockdown is downgraded from level 4 to level 3 on June 1, many of the airlines do not intend to fly as it would not make financial sense to operate with limited travelers.

According to Iata, government aid is helping keep the industry afloat in most countries. However, it notes that SA airlines have not received much government assistance. Its data shows that government aid has been between 1% and 5% of airline ticket revenues. This is despite the sector being a key economic and jobs driver.

In total, governments have committed to $123bn in financial aid for airlines. Of this, $67bn will need to be repaid. The balance largely consists of wage subsidies ($34.8bn), equity financing ($11.5bn), and tax relief/subsidies ($9.7bn). This is vital for airlines that will burn through an estimated $60bn of cash in the second quarter of 2020 alone, said Alexandre de Juniac, Iata’s director-general and CEO.

“The next challenge will be preventing airlines from sinking under the burden of debt the aid is creating,” said De Juniac, adding that more than half the relief provided by governments creates new liabilities. Less than 10% will add to airline equity.

“It changes the financial picture of the industry completely. Paying off the debt owed to governments and private lenders will mean the crisis will last a lot longer than the time it takes for passenger demand to recover,” De Juniac said.

Iata has urged governments still contemplating financial relief to focus on measures that help airlines raise equity financing. Said De Juniac, “Many airlines are still in desperate need of a financial lifeline. For those governments that have not yet acted, the message is that helping airlines raise equity levels with a focus on grants and subsidies will place them in a stronger position for the recovery.”