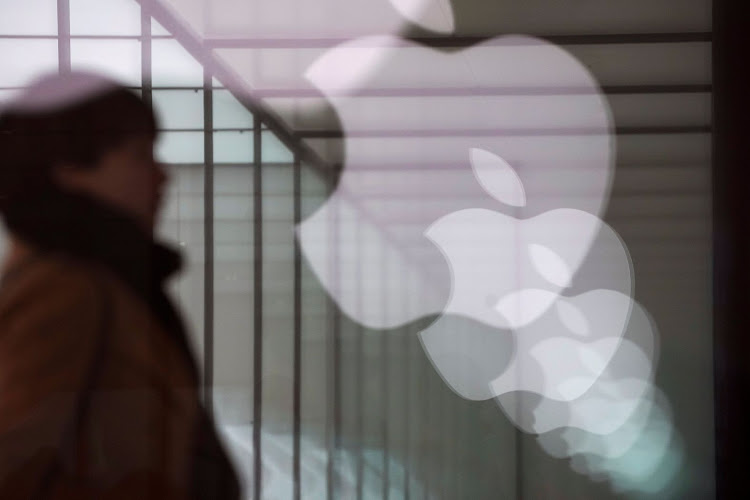 Apple company logos are reflected on the glass window outside an Apple store in Shanghai, China. The company is under pressure to move manufacturing out of the country. Picture: REUTERS/ALY SONG

Taipei — Apple’s reliance on China is looking increasingly like its biggest handicap.

The world’s most influential consumer electronics company shed $44bn in market value on Friday after pronouncements from Beijing and Washington cast a spotlight on its enormous Chinese production base, from which almost all of the world’s iPhones are made.

US President Donald Trump this weekend “ordered” American companies to immediately start looking for alternatives to manufacturing in China, which is something Apple is thoroughly unprepared for, according to analyst David Ives of Wedbush Securities.

“In a best-case scenario,” says Ives, Apple “would be able to move away 5%-7% of iPhone production out of China” over 18 months. The company would require three years to move 20% out, he adds, which is less than the 25% of iPhone production that Apple needs for its domestic US market. American tariffs on goods from China would therefore directly affect Apple’s biggest moneymaker.

Ives calls Trump’s latest comments on China “a gut punch to Cupertino” in the title of his report, a reference to the Silicon Valley city known as the headquarters of Apple.

Apple’s main assembly partner, Foxconn, has claimed that it has the capacity to build all of the company’s US-bound iPhones outside of China, however all indications are that to deploy it would require much time and money.

People familiar with iPhone production have said that it is nearly impossible to relocate manufacturing of Apple’s iconic device extensively due to the difficulty of procuring a skilled labour force elsewhere, a point that Apple CEO Tim Cook has hammered away at in public as well. The challenges of replicating the complex production lines and necessary infrastructure are also major hurdles.

While Apple has asked at least some suppliers for proposals on ex-China production, there’s no sign the company is preparing for a large-scale migration.

In one case, an assembler proposed a location outside of China, but Apple rejected it and the supplier ended up expanding in China. The recent effort by GoerTek to shift some of its AirPods production to Vietnam was done by its own volition, people familiar with the decision said. But neither of those relates to the iPhone, which remains chiefly made in China, with older models assembled in India and focused on the domestic market there.

Tim Cook’s ability to lobby Washington for tariff relief will be tested over the next weeks. He has so far been able to obtain a temporary reprieve for iPhones, iPads and Apple laptops, which won’t be subject to US tariffs until December 15. But going forward, unless an unlikely rapid resolution to the trade war is reached, Apple looks like it will have to draw up comprehensive plans for building iPhones outside of China, however costly that may be.

US CEOs sound alarm on Trump’s threats over China

Apple TV and movie service to roll out by November

US CEOs sound alarm on Trump’s threats over China

Apple TV and movie service to roll out by November