Because Tyson Foods ‘cares deeply about all proteins’, a move away from purist vegan fake meat is the way of the future 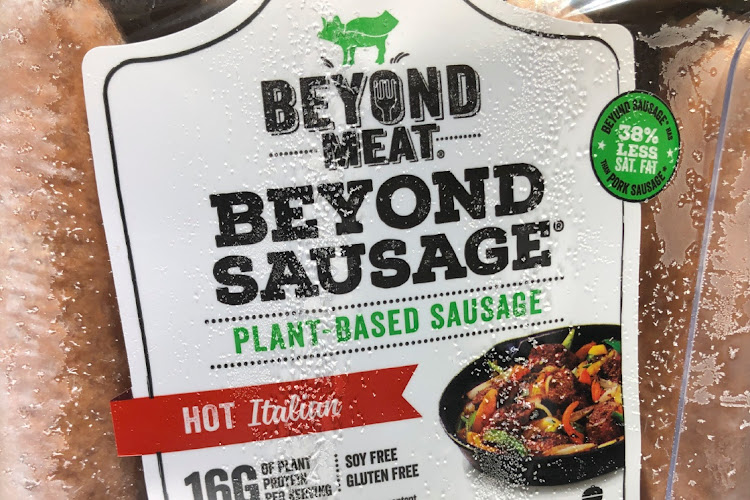 Beyond Meat will soon have competition from a hybrid plant-beef burger and other products. Picture: REUTERS/MIKE BLAKE

Chicago — Tyson Foods, the biggest US meat processor, wants in on the veggie protein market that’s hot with consumers and investors alike.

The meat giant is aiming to satisfy demands of the so-called flexitarians, a rapidly growing segment of people who eat meat but are cutting back and adding more vegetable-based protein to their diets. Tyson’s solution: a half-pea-protein, half-Angus-beef burger.

In what could be the biggest foray into the burgeoning alternative protein market this year, Tyson said it will debut the hybrid meat-plant patties and a series of other related products this year in grocery stores as well as restaurants. CEO Noel White said he expects the offerings will become a “billion-dollar brand” and that the company will be a leader in the space.

The company is joining the scrum of companies rushing headlong into meat alternatives after Beyond Meat’s sizzling initial public offering (IPO) in May left them playing catch up. Tyson sold its stake in the latter company just before the stunning equity debut. Beyond Meat shares are up more than five-fold since they started trading.

Tyson’s shares gained 2.3% at 9.33am in New York while Beyond Meat was little changed.

“We’ve confirmed that alternative protein is growing and that it makes sense for us to be a part of it,” O’Mara said by phone.

Shift away from purist vegan

Tyson’s beef-plant hybrid burger, sold under the brand Raised & Rooted, is expected to reach consumers in the fall. Other new products the company plans to offer include sausages and meatballs made of a chicken-plant blend under the Aidells Whole Blends brand. The meat producer is also introducing a pure plant-based chicken nugget substitute, which will come to market this summer.

Tyson will be able to bring the products to market from the development stage in under a year, and the company doesn’t need to make extra investments to produce them, said Justin Whitmore, chief sustainability officer and head of alternative protein.

Whitmore declined to comment on price points, the size of investments, or provide any details on customers. The new products are coming to several major retailers where consumers regularly shop, he said. The blended burger and sausages are a noticeable shift away from that of the company’s purist vegan rivals, namely the Beyond Burger and Impossible Burger.

“We’re bringing forward an entire set of offerings across brands and channels that satisfy how consumers are eating today rather than one approach,” he said.

Tyson is making a health pitch as well with its new products. The hybrid burgers made of Angus beef and pea-protein isolate have fewer calories and less saturated fat than other pure plant-based burgers on the market, Whitmore said.

The move also fits into the sustainability goals for the giant producer of beef, a protein that has long weathered attacks from environmentalists that say the industry contributes heavily to greenhouse gas emissions. Tyson recently pledged to reduce emissions by 30% by 2030.

“We care deeply about all proteins and what it takes to be as efficient as possible,” Whitmore said. “This fits in with our total story.”

With from Deena Shanker

Tyson Foods warns African swine fever may reach the US

The US meat processor expects to profit from the swine fever outbreak in China, the world's top pork producer
Companies
2 years ago
Next Article

Beyond Meat to make plant-based meat substitutes in Europe

Beyond Meat to make plant-based meat substitutes in Europe